Oggu Katha: Sattaiah has award under the artistes category by the TS first formation day 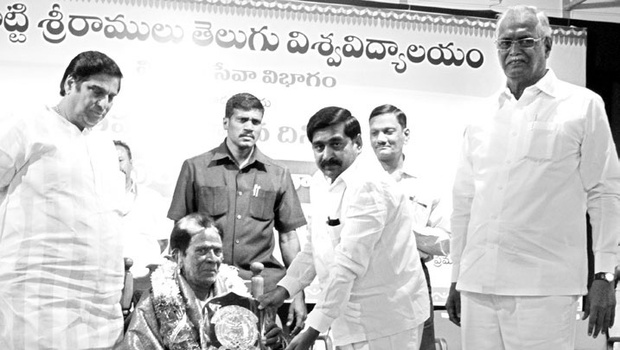 Chukka Sattaiah (84), an ‘Oggu Katha’ (a folk art) exponent, stressed on the need for the government to focus on folk art forms in the state.

‘Oggu Katha’ is like a ballad depicting the chivalric deeds of ‘Veera Bhadra’ and ‘Mallikharjuna Swamy’ and ‘Renuka Yellamma’.


Folk Artiste, Chukka Sattaiah
Sattaiah has been chosen for an award under the artistes category by the Telangana state government on the occasion of Telangana state first formation day.
“Though Oggu Katha is enjoying the patronage of the people, especially Yadava community, in the districts of Warangal, Karimnagar and Medak districts and other parts of the state, there is severe shortage of the instructors”, he said.

Due to this, the people of this generation are not imparted with proper training in Oggu Katha, said Chukka Sattaiah, who also worked as an instructor at the Department of Folk Arts at Potti Sriramulu Telugu University for two years.

However, Sattaiah, who has earned name and fame for his exceptional skills in narrating the stories in Oggu form, has urged the government to promote the folk arts forms including Oggu Katha in a big way to protect the Telangana culture.

Hailing from a remote village, Manikyapuram in Lingalaghanapuram mandal in the district, Sattaiah performed in almost  12,000 shows across the nation  in his 40- years long career. He filled the audience with awe across the country irrespective of their language and cultural background. He also received several national and state awards Kendriya Sangeet Natak Akademi award and also received  Doctor of Letters (Honoris Causa) from Kakatiya University.

Thank You For Your valuable feedback